Day One of Turkey Season 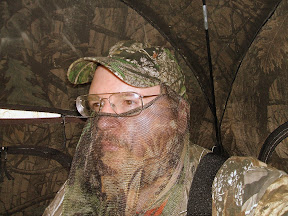 The opening of turkey season was a bust for me but it appears others across the state did well. The front that came through on Saturday gave us a cloudy overcast day with a number of thunderstorms throughout the day.

I was at the hunt camp up in Caswell County with a couple of friends for the opener none of us had any luck. I had a plan of where I wanted to go because the week before we had heard gobblers in this particular area and it’s one of my favorite places to hunt so I decided to go in there. I hadn’t been in there in a while and there is a thick stand of pines to get through that is easy to get turned around in the dark. I normally go in every year just before deer season and re-blaze and re-mark the trail but being sick last summer I didn’t do it. I was confident that my memory and the old trail markings I could slip in well before daybreak and be in position to listen for gobbles. Besides if I got confused my GPS would back me up.

Well best laid plans don’t always work out. I got about halfway through the pines when I lost the trail and after moving the general direction I thought was right I realized that I was off the trail. There were a number of trees and branches down and I was trying to pick my way through quietly because turkeys often roost in this area. I had a clear view of the sky when I looked up and I fired up my GPS. After what seemed like an eternity but was really just a few minutes I got a lock on the satellites and I quickly hit the search for the nearest waypoint. My big mistake was not looking very closely at it because I knew it was the nearest point because of the deer stand. Latter I would remember that I had replaced my GPS and this particular deer stand was not in my new GPS but at that moment I headed off in the wrong direction. I went a little ways and knew I should be out of the thick cover but I wasn’t. At that point I knew something was wrong so I dug out my compass and got a bearing that should take me to the opening where I wanted to set up if I missed it I knew I would hit the creek and I could set up there. Well I hit the creek having missed the opening by only 200 yards or so. Once I hit the creek I knew exactly where I was and I could back track to the opening but given I hadn’t busted any turkeys with my roundabout trek in that I didn’t dare push my luck by doubling back up the ridge to the opening. I set up on the creek bottom and waited for daybreak.

Daybreak came and went with out the first gobbler sounding off. There was plenty of noise to entice a shock gobble between the crows and the geese not to mention the occasional roll of thunder. With no turkey noise at all I settled in on the creek bottom knowing the gobblers often use it as a travel route. I did the occasional calling hoping to have a gobbler check me out. I heard some noise behind me coming from the area I had originally wanted to hunt so I started to turn around slowly. A few minutes latter a fat grey squirrel came bounding off the ridge. I started to turn back around when I heard him, a Jake looking for that hen he had heard. He circled above me and back into the pines without making a sound.

That was the only turkey I saw all day. The afternoon I sat in a blind on the field edge and never saw or heard anything. As the sun was setting the walk back to my truck was a lot easier then my morning walk in because I just had to cut across a couple of fields and up a field road to my truck. I can assure you I’ll re-blaze and re-mark the trail in the near future so I don’t get confused my GPS has already been updated. 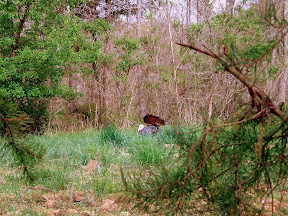