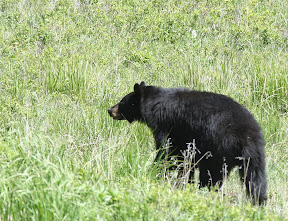 Currently in North Carolina those hunters who hunt bears with hounds can legally bait bear with natural baits ie. Corn or grain but those that stand hunt bears cannot use bait at all. The non hound hunters are complaining that this is unfair and want the NCWRC to either allow all bear hunters to utilize natural bait or let no one use natural baits.

The current rules were set up I believe not to really allow the baiting of bears by anyone but to give some leeway to hound hunters around the issue when it came to bait sites for deer. Baiting of deer is legal and has a long tradition in North Carolina and the deer and bear seasons overlap. Under some of the earlier rules you had a number of bear hunters cited for hunting over baits when the dogs trailed a bear through a bait site set up by a deer hunter. This scenario played out a number of times making illegal hunters out of guys that really were trying to do the right thing. So that is how the current law got adopted to really give a loophole of sorts otherwise it would be nearly impossible to pursue a bear in this state without it crossing a natural bait site for deer.

At the Big Game Committee Meeting some of the Commissioners pointed out that their intent was not to allow houndsmen the opportunity to bait but that is what has happened.
Tuesday’s meeting the subcommittee looked at basically three options to address the bear baiting issue;

There was nobody that seemed to be in favor of option A option B was favored by most of the observers in the room that self identified as “non hound hunters” and option C was favored by the North Carolina Bear Hunters Association / houndsmen.

The biological staff presented that if option B was the option that was selected that in all likelihood some additional methods would have to be put in place to prevent an overharvest of bears. That would mean a limit on tags or a shortening of the season. There is no doubt that option B would lead to more hunters pursuing bear whether they purposely go after them or it’s an incidentally take while deer hunting. I’m not sure that it would lead to a drastic increase in the bear harvest over time, initially it might, but bears seem to adapt to pressure more readily then most big game animals.
On the next post I’ll present an overview of the Black Bear in North Carolina as presented by the biological staff at this meeting as well as talk a little more about the concerns over selecting option B from those present at the meeting.