It was April fifth and my feet were frozen.  Mother Nature had smiled upon us during the last 4 days, but today she hit us with a sudden cold snap.  We were hunting turkeys during Kansas’ archery only season, No Bird Left Behind – A Turkey Tale.  In the darkness of the Double-Bull blind my buddy pulled out a Greenhead vacuum bottle and poured us both a cup of hot steaming coffee.  Aaahhh, as I tried to wrap all ten fingers around the little cup I contemplated that life truly was never so good.  Then it was back to watching for turkeys.

After that hunt I decided that although I had a full-sized vacuum bottle at home, I needed a small 16-18 ounce bottle for the deer and turkey woods.  And, if my fortunes were down, to use at work also.  But which one?  Dad told me I could get one for $6 and my buddy said he paid more than $20.  I searched the reviews on big box outdoor store websites, but they varied so much they really weren’t much help.  One guy gave the cheap vacuum bottle a 5 star rating and the next rated it 1 star.  Who knew the truth?

So, despite Mrs. dustyvarmint’s sarcastic reminders of six months shopping for a $28 factory second sleeping bag and eighteen months comparison shopping for a $17.00 cooler, I decided a vacuum bottle test was in order.  Hopefully, this information will save you a little money and derision from your Mr. or Mrs. Hunter.

The thermos line up. 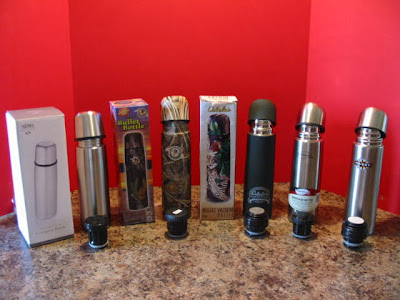 Next, I had to decide how to test them.  So, I started brain storming ways to shoot them into plywood (sorry, a reference to some lame broadhead testing I once read about).  I decided I’d fill them with hot water of a specific temperature, let them sit for a specific period of time and then check the liquid’s temperature.  The three tests included inside for at least eight hours, outside for at least eight hours and in the refrigerator for the same amount of time.  After completing test one I decided to include my full-size Thermos brand bottle and a normal water pitcher for comparison purposes. 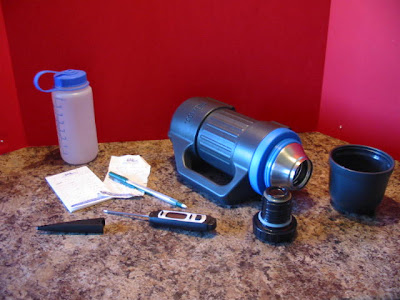 The following table shows the results of placing the bottles on the counter over night from 8:05 p.m., temperature 69.0º, to 8:05 a.m., temperature 69.0º; a total of 12 hours.  All bottles were pre-warmed, as is my normal habit, for 10 minutes with 105.7º tap water then filled with 181.6º water from my coffee pot.  Thermos-Nissan was the clear winner followed closely by the regular Thermos and the Greenhead Bullet.  Last place goes to the Quest with the Cabela’s only slightly edging it out.

The next table shows the results of placing the bottles outside over night from 9:10 p.m., temperature 80.1º, to 7:52 a.m., temperature 74.9º; a total of 10 hours and 42 minutes.  Again, all bottles were pre-warmed for 10 minutes with 120º tap water then filled with 175.6º water from my coffee pot.  Thermos-Nissan is the clear winner followed closely by the regular Thermos and the Greenhead Bullet.  Last place goes to the Quest with the Cabela’s only slightly edging it out.

Test 3 – In the refridgerator

Finally, this last table shows the results of placing the bottles in a 39.6º refrigerator from 11:35 a.m. to 8:13 p.m.; a total of 7 hours and 38 minutes.  All bottles were pre-warmed for 10 minutes with 120º tap water then filled with 177.5º water.  The Thermos-Nissan is the clear winner followed closely by the Greenhead Bullet and the regular Thermos.  Last place goes to the Quest with the Cabela’s again only slightly edging it out.

There is one primary difference between the top three and the bottom two bottles.  The top three all have a one piece stopper with quick-pour feature – you pour the coffee by unscrewing the stopper just a few turns without removing it.  The bottom bottles have a push-button pour-through feature.  It seems as if this design does not retain heat as well.

So, overall ranking based on performance is the Thermos-Nissan, Thermos, Greenhead Bullet, Cabela’s and Quest.  I chose to keep the Thermos-Nissan and return the others.  However, if I were to buy a bottle today knowing what I know now I would choose the regular Thermos bottle available at Gander Mountain or Wal-Mart.  It is definitely the overall best value.  If I absolutely had to have camouflage I’d go with the Greenhead Bullet. 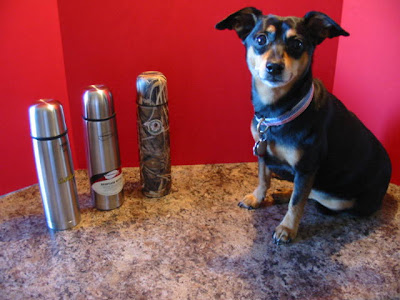 I’d like to hear your tips, feedback, comments or questions.  Please leave them below.