Earlier this year I used my last sacred package of feral hog breakfast sausage from P&P Deer Processing in Coalgate, OK.  It was celebratory and mournful all at once.  We connected with P&P from nearby Shiloh Ranch Hunting Camp where we hunted the tusky varmints for a couple of years.  Other pursuits have diverted us, but my preference for the tasty sausage has not diminished.  I like to pre-cook and freeze a pound of patties on Sunday and eat them throughout the week for breakfast.  With a little 2007 and quite a bit of 2008 venison as well as a little javelina meat from this year’s Texas adventure, Boar Attack – Anatomy Of A Hog Shot Gone Wrong, in the freezer I thought it was time to give breakfast sausage making a try.

I’ve made ground meat jerky and snack sticks for years so I didn’t think it would be much of a stretch into breakfast sausage.  The directions on the LEM brand seasoning package called for cutting the venison with at least 20% pork so I asked mrs. dustyvarmint to pick up a slightly larger than one pound, well-marbled roast from the store.  One could probably not mix in the pork or other fat, but the end product would be very, very dry.  Since grinding slightly frozen meat helps to maintain lower processing temperatures and helps produce a better final product I froze the roast.  Later I pulled out the roast and slightly more than four pounds of venison from the freezer and let them partially thaw in the refrigerator.  I sliced them up into large strips for grinding and mixed the pork with the venison. 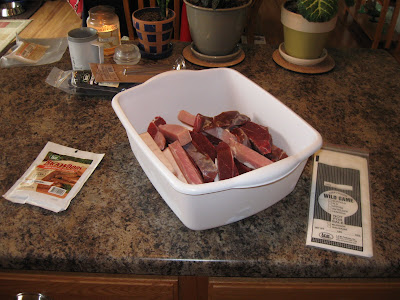 Next, I ground the meat up making sure the venison and pork were well mixed.  Following the package directions, one teaspoon of seasoning was mixed with one ounce of cold water for every pound of meat.  Hands are really the best tool for mixing here, but boy does that get cold!

The pork and venison ground.  (Sssshhh, don’t tell mrs. dustyvarmint her nice bamboo cutting board is being used as a riser for the grinder!) 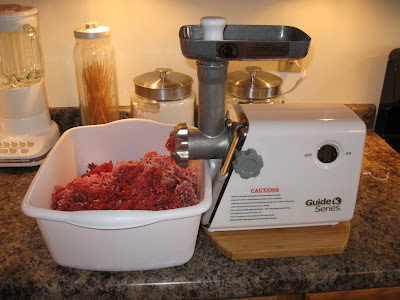 I really like slicing up patties from partially thawed tubes of the sausage as shown below.  Not totally necessary, but very handy.  They go right in the skillet after that.  I was worried that my stuffer’s largest tube wouldn’t be big enough to fill the packages properly, but that turned out to be unfounded.  The first package turned out at about one-and-one-half pounds, but I got the hang of it after that.  The results are pictured below. 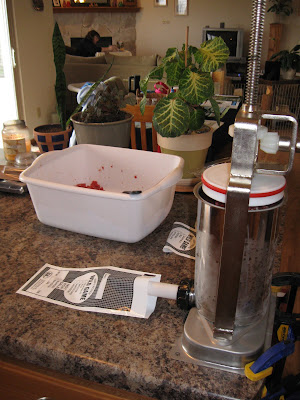 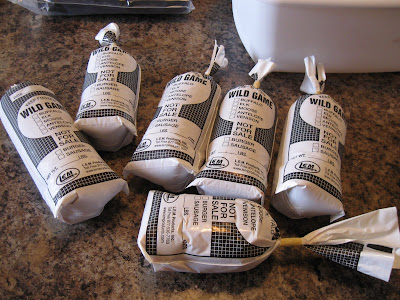 I couldn’t help myself, but to give it a try, so I waited just long enough for one package to partially freeze, sliced it up and put a fire under it.  It turned out quite… tasty.  A little crushed red pepper would probably be a good addition, but the test batch is out of the way.  While I prefer my chili, taco and burger grind to be really fine I think a slightly chunkier texture would be more appropriate for this sausage.

When coupled with mrs. dustyvarmint’s drop biscuits the sausage was quite tasty… 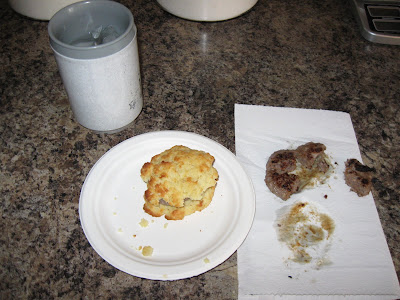 All the grinder and stuffer components as well as the knives, cutting boards and other accessories get a nice hot water and soap bath as well as a chlorine dip after use.  Hopefully, that’ll keep the varmints (not the dusty ones) out.

mrs. dustyvarmint has been very kind to me with processing equipment over time.  Both the grinder and stuffer came from Gander Mountain on Black Friday sales – about $100 between the two.  The grinder has processed many deer, hogs and other wild game as well as domestic critters from time to time.  The stuffer produces snack sticks and other kinds of sausage as well as handling the packaging this time.  The meat tubs are actually dish pans, under $5 from Target, that fit in my refrigerator better than commercial versions.

I’d like to hear your tips, feedback, comments or questions.  Please leave them below.