March 30, 2011:  Michael Lee traveled to Donalsonville, GA with cameraman Jason Heathcoe to hunt with Mike Watson and eleven year old Jordan Trawick on his father Brad’s farm.  It wasn’t long as the sun began to light up the eastern sky that the crew had a gobbler hammering.  Setting up their Ghostblinds on a large food plot between a large cow pasture and a swamp bottom was a perfect spot for calling in birds.  Michael first sweet talked a nice gobbler just out of gun range for Jordan with his Backwoods Assassin glass call.  Then another gobbler came into the plot and took the first gobbler off with him.  A few minutes later six jakes were coaxed into gun range for Jordan and he slammed his first turkey ever! 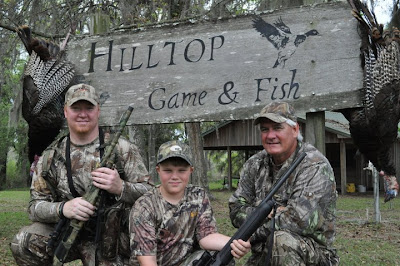 A few hours later the guys saw a group of birds in a big pasture, one of them a mature gobbler.  Michael and Jason (videoing) crawled to the top of a hill where they could watch the gobbler then Michael called to him with his Backwoods Ninja mouth call.  The gobbler immediately began strutting and gobbling right back.  Suddenly a large group of jakes started running over to Michael’s calling and the gobbler couldn’t let them beat him to the “hen” so he started coming right to Michael and Jason.  Michael aimed his Hawke red dot scope on the birds neck and squeezed the trigger.  Number one for Michael was on the ground! 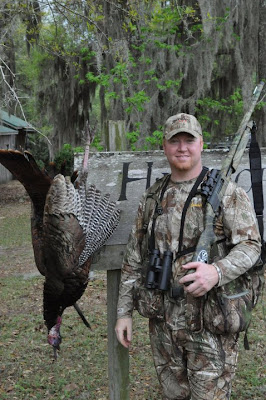 Talk about a great opening day!